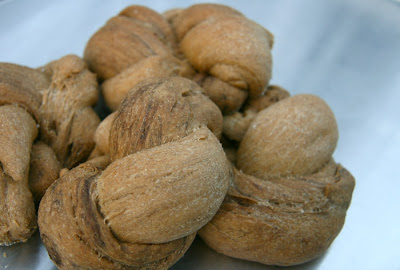 Since my childhood I've always loved rye bread in any form - and the next bread I was to bake in Peter Reinhart's The Bread Baker's Apprentice , Marbled Rye Bread looked particularly appealing to me. The picture in the book shows a lovely loaf with beautifully delineated light and very dark areas.


My husband is the primary bread eater around here, and eats it either as breakfast toast or an accompaniment to dinner. Since he has never been a fan of rye toast I decided to make this bread as dinner rolls. I had visions of cunningly twisted knots of light and dark dough baking into high-contrast, visually appealing (delicious, of course) puffy rolls.

Sad to say, the reality of my rolls diverged significantly from the vision of lovliness I'd imagined. As you can see in the picture, the marbling was essentially non-existent, but luckily the rolls did taste delicious.


- Here's the basic techique for this bread: mix up two different colors of dough, roll them together to form one loaf (or, in my case, rolls), then bake. The result should be marbled splendor.

- Although the two doughs look a lot different in the book, they are in fact nearly identical in ingredients. One of the dough has extra ingredients added to darken the color.

- The recipe calls for two kinds of flour; one third of the flour is specified as "white rye flour," a double sifted flour with the bran and germ removed. I didn't have any of that kind of flour, so I used some medium rye flour that I had on hand, and stirred it through a sieve to remove the coarser bran particles.


- For the remainig two-thirds of the flour, Reinhart gives a choice of either bread dough or "clear flour," a coarser flour with a higher content of bran and ash than bread flour. Clear flour is commonly used for making rye bread. I had ordered some "first clear" flour from King Arthur Flour, which I used for this bread.

- The dough contains molasses as a sweetener. Both the light and the dark doughs contain the same amount of molasses, in fact. This is where my bread went irretrievably off the track. The molasses made my "light" dough fairly dark. My light dough and my dark dough were essentially the same color. Additionally, I realize now that the organic molasses is "blackstrap" (although it's kind of hidden on the label) which means it's darker (and stronger in flavor) than ordinary molasses. So that's why both of the doughs were so dark. If I were to bake this bread again, I'd probably use honey or golden syrup in the light dough to make sure that the contrast in color would be noticeable.

- Reinhart gives instructions for darkening the dark dough with liquid caramel color, or with coffee, carob, or cocoa powder (which can make the dough a slight bit bitter). I didn't have any of the liquid caramel color. I first tried adding coffee to my "dark" dough. Sadly the dough didn't end up darker than the light dough. As a last ditch effort, after the dough was already mixed, I sprinkled super dark cocoa powder and tried to knead it in. It wasn't successful on any front. The dough was streaky but not really darker.

- Once my dough had risen, I rolled it into snakes then twisted them together into rolls. It really was impossible to tell the two doughs apart by looks; the "dark" dough did have a slight bitter taste.

Despite my many woes with producing actual marbled bread, the rolls ended up tasting quite good. My husband loved them, even though he usually doesn't care for rye bread.
Posted by Nancy/n.o.e at 4:34 PM 3 comments: