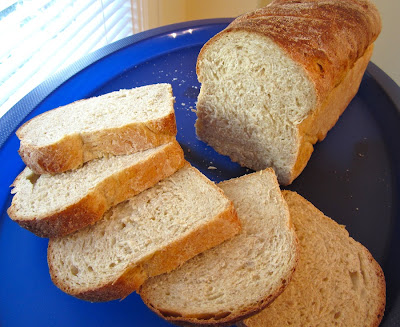 I was lucky enough to find The River Cottage Bread Handbook by Daniel Stevens at the library recently. I've been intrigued by the series of cookbooks put out by River Cottage, an English food-based entity founded by Hugh Fearnley-Whittingstall. In its words, River Cottage stands for "less dependence on the outside world, food integrity, and the consumption of local, seasonal produce." River Cottage runs a variety of programs and coordinates its activities with several different charities.

My daughter ALE has used the River Cottage Preserves Handbook with notable success, and I was eager to dive into the bread volume. The first part of the book sets out in great detail the principles behind bread and how the ingredients interact with each other. I decided to start baking with the first recipe, the Basic Bread, which is more of a formula. The basic recipe gives a lot of leeway to choose the type of flour, the liquids, the (optional) fat and sweetener, as long as the same baker's percentages are maintained.

- To see a very basic form of the recipe, click here.

- I made a half recipe, yielding one large loaf of slicing bread. The recipe, as I made it, is at the end of this post.

- For this first loaf, I stuck with my favorite combination of bread ingredients: part whole wheat flour, milk, honey, and olive oil. This made it somewhat similar to Dan Lepard's Milk Loaf, except that the River Cottage formula is less hydrated: 300g of liquid per 500g of flour, to Lepard's 350g liquid to 500g of flour.

- I used freshly ground hard red wheat for 30% of the flour, and the remaining 70% was all-purpose flour.

- The liquid I added was milk, and I included optional fat (olive oil) and sweetener (honey).

- I began kneading in food processor, but the processor I was using proved to be too small for the job. So I finished kneading the dough via Dan Lepard's method: brief kneading alternated with 10 to 15 minute rests. The dough was pretty stiff, so I ended up adding a bit more milk.

- In the recipe, Stevens says that you can deflate and then let the dough rise up to four times, and it will improve the bread's flavor. I gave my dough lots of resting periods, in between the kneading.

- After shaping the loaf, I coated in whole wheat flour before putting it in the bread pan. This was a new technique for me. Here's the way Stevens explains this step:


You can leave your loaves naked, but they will be much more grateful - and feel much more beautiful - f you give the a lovely coat to wear. Select a flour, or choose grains and seeds.

- The loaf rose beautifully as it baked.

- I started baking the bread in a very hot oven then I turned it down to around 350 degrees because it was so browned.

This was a fun bread to make, especially coating the outside of the bread with flour. I like the resulting crusty crust on the sandwich loaf. The loaf's crumb was sturdy and soft at the same time. This bread made lovely toast.

350 g all-purpose flour and 150 g whole wheat flour (4 cups total flour)
5 g instant yeast (1/2 T)
5 g fine salt (2 tsp)
300 g(ml) milk (1 1/4 c) (warm)
a good slug of olive oil (or could use 2 tsp butter)
1 handful of whole wheat flour, for coating
- Mix the ingredients in a large bowl, then knead the dough by hand on an oiled counter until satiny (about 10 minutes). Alternatively, mix the ingredients in a large food processor, dry ingredients first then add the wet ingredients steadily while the motor is running. Pulse for about a minute, then test the dough to see it forms a windowpane when stretched between your fingers.
- Form the bread into a round and put in an oiled bowl to rise until doubled, approximately an hour, depending on the temperature of your kitchen.
- Knead the bread to degas it then form into loaves as desired and coat the bread in whole wheat flour. If you're making sandwich loaf, place the dough in an oiled and floured 1 pound size loaf pan. Allow loaves to rise, covered loosely with a plastic bag, until nearly doubled.
- Bake the bread at 525 degrees (500 convection) for 10 minutes. A steam method is recommended, as well as spritzing the bread first with water before placing it in the hot oven. The recipe also specifies that the loaves be slashed. I slashed but didn't steam my loaves.

- Turn the oven down to 425, 375 or 350 degrees, depending on how brown the crust is getting, for about 30 more minutes, until the loaves sound hollow when tapped, or register about 195 degrees on an instant read thermometer.

I'm submitting this bread to Yeastspotting, a weekly roundup of all things yeasty.
Posted by Nancy/n.o.e at 12:03 AM 2 comments: