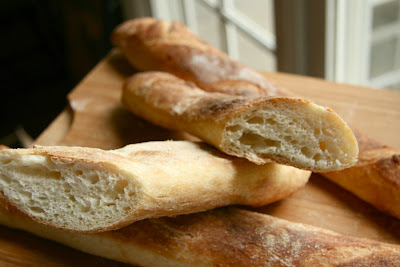 It's been quite a while since I've posted a hearth bread on this blog.  Truth be told, I don't bake many hearth loaves; most of the bread consumed in our house is in toast form, so I'm usually baking bread in loaf pans to be sliced and toasted for breakfast.  And (maybe because I make so many sandwich/toast loaves) I'm not very comfortable baking hearth loaves.

At any rate, Peter Reinhart's book The Bread Baker’s Apprentice has a hefty share of free-form loaves, so I inevitably get some practice as I make my way through the book as part of the Bread Baker's Apprentice Challenge - an endeavor that I am still erratically pursuing, although I will be skipping the part of the challenge that deals with sourdough starters.  It's a bit too much of a challenge for me right now!  Anyway, enough digression.

The next bread from BBA is the Pain a l'Ancienne, a venerable baguette in which all of the flavor of the wheat is unlocked via a process of delayed fermentation at controlled temperature, ie, using cold water and storing the dough in the refrigerator for a time.

Although it sounds pretty complicated, if you follow Reinhart's directions it comes together fairly easily.  I'm still not very confident in my bread-shaping abilities, but my loaves turned out decently and I have to say the aromas wafting through my kitchen as the bread baked were tantalizing!

-  I made half recipe of this bread, which yielded three baguettes.

-  I have to admit that I didn't keep many notes when I was making this bread, but you can see step by step photos of how this bread is made on this post by BBA Challenge founder Nicole.  Members of the Challenge are asked to not post the recipe.

-  The crust of my bread developed a beautiful golden color, but the crumb was a bit denser than I would have liked - some big holes would have been lovely! 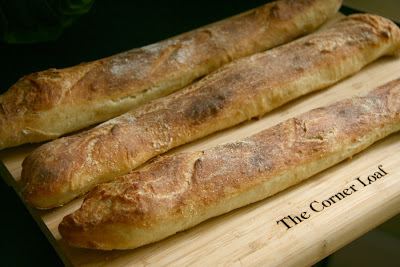 I served this bread to my to book group, and it was a resounding hit with everyone.  I was smitten with the chewiness and flavor of this bread; in fact it might be the best loaves that I've ever baked!
If I had my druthers, I would have preferred large airy holes inside, but who can quibble when the bread tastes this good?
Posted by Nancy/n.o.e at 11:29 PM 3 comments: