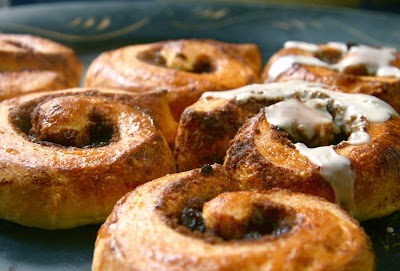 The fun and learning of the BBA Challenge continues! This round's assigned bread is Brioche, that buttery and delicate French yeast bread. I'll have to say I felt like a real "grown up" bread baker this time around. The Anadama (Round 1) was quirky and friendly, the Artos (Round 2) was interesting and cultural, the Bagels (Round 3) were iconic yet approachable, but the Brioche is sophisticated and just a bit intimidating. It is a bread that I would not typically select, but I enjoyed baking such a famous bread and working with a different type of dough.

Brioche, a classic French recipe, is an enriched dough, typically containing a generous amount of eggs and butter. Brioche can be eaten as a loaf or can be the base recipe for many other types of baked goods (e.g. cinnamon rolls, sticky buns, tarts, wraps and en croute applications.) Reinhart gives three different formulas for brioche, Rich Man's, Middle Class, and Poor Man's, with correspondingly lesser amounts of butter as the class decreases. The richest of the doughs contains a whopping 90% ratio of butter to flour. The leanest, Poor Man's, is suitable for en croute and other applications, having no butter at all. 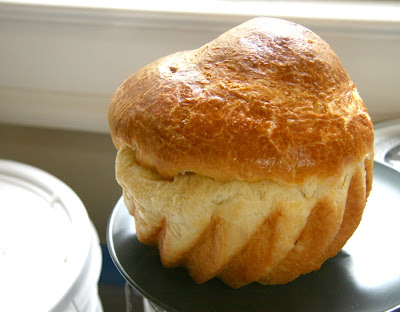 Brioche is traditionally baked in round fluted pans of varying sizes, and the bread is shaped with a "tete" (head in French) on top. I drew the line at buying a specialty pan for one batch of brioche - I rather doubt that brioche will make a regular appearance in my kitchen. I do have a vintage tin mold that is somewhat similar so I decided to use part of my brioche dough to make a traditional loaf a tete and shape the remainder of the dough into cinnamon rolls. 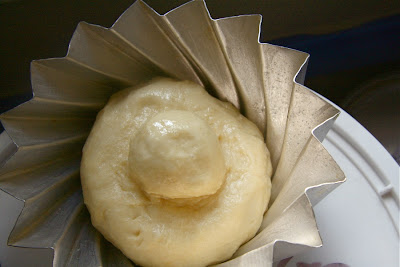 
- I made the Middle Class brioche, since Reinhart says that this dough is good for cinnamon rolls, albeit rich ones. To bake this variation, I had to flip pages in the book. The ingredients are listed under the Middle Class formula but then the bread follows the method of the Rich Man's page. This ended up being pretty confusing, as I kept measuring out the Rich Man's ingredients by mistake. This has happened to me with other recipe variations in the BBA book (the Artos week, when I forgot to add the fruit at the appropriate time). Although I managed to avoid any mistakes, I caught a few just in time! Next time I make one of Reinhart's variations I will retype the recipe to bypass the confusion.


- You can find a version of the Middle Class brioche recipe here.

- Making the sponge was pretty uneventful

- I did forget to soften the butter, so I ended up using the microwave.


- When the sponge was ready I used my food processor to mix the dough. This is how I did it:

--First I pulsed all of the dry ingredients.
--In a separate bowl I whisked the sponge with the eggs. Then slowly I added this "wet" mixture to the dry, pulsing between additions, until incorporated. At this point the dough was pretty stiff.
--Then I added the soft butter in 4 batches, pulsing briefly to incorporate, then a bit longer until the dough was mixed and smooth

- When I was patting the dough into a rectangle I found some flour lumps, which I tried to squeeze with my fingers.

- The dough contained an amazing amount of butter - and this was the Middle Class variation? With the Rich Man's it would have been a question of "have a little flour with your butter? "

- My dough weighed almost exactly 1 kg. I used 400g (14 oz) for the loaf and the other 600 g I formed into cinnamon rolls. Working with the dough was more like shaping (greasy) modeling clay than bread dough.

- As it baked, my brioche a tete loaf lost its tete. I still thought it was pretty cute. 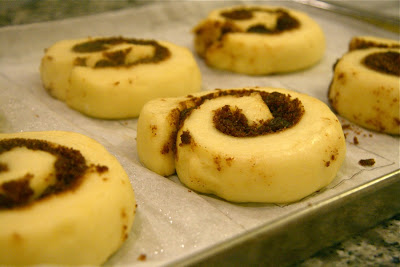 - I got my inspiration to make cinnamon rolls from a blog called The Missing Piece, specifically this post about brioche/cinnamon rolls. I used her recipe for cinnamon sugar as a jumping off point. Here's what I mixed: 3/4 c dark brown sugar, 1/4 c granulated sugar, 5 tsp cinnamon, 1/8 tsp salt and 1 1/2 T melted butter.

- I made the rum raisins from Dorie Greenspan's Raisin Snails


- The cinnamon rolls expanded a lot in the oven, spreading out not up, so they looked like saucers. Or dinner plates! I wish I'd sliced them thicker, so they'd have been nice and tall. 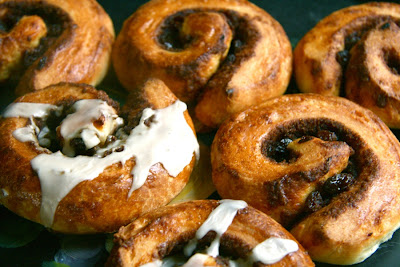 We were invited to an outdoor dinner and concert and I brought the loaf as a gift for the host couple since I knew that we would never eat a whole loaf of brioche. Luckily they passed it around for those who wanted tastes, and I got to sample a bit. It had a lovely crumb inside and tasted quite refined and buttery. 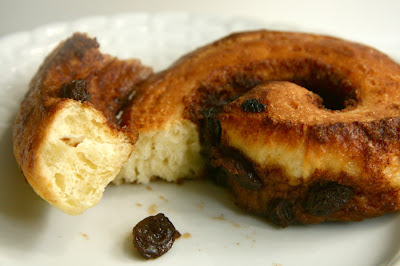 And the cinnamon rolls? Let's just say that my husband ate three for breakfast! I had a bite of one of his - the crumb was delicate and light. I really liked the intense cinnamon sugar and the raisins were a nice addition but the rum was pretty subtle, I thought. I'd probably prefer a chewier, leaner dough in my cinnamon rolls, but these were pretty good (my husband would say delicious!) We'll be trying Peter Reinhart's version of cinnamon rolls when we get a little further down the alphabetical list, and I will be quite interested in seeing how they compare (I've saved a few of this batch in the freezer.)

Our next bread will bring us to the letter "C" (the book is arranged alphabetically)! and the unusual Italian savory brioche-type bread known as Casatiello. Look for the post in about 2 weeks. Come back before then to see the Brioche Roundup of the Slow and Steady BBA Challenge subgroup, and maybe some non-BBA bread, too!

Update: I'm sending this bread over to Yeastspotting. Check out all the yeasty goodness that is posted there weekly!

I'm going to apologize again for any weird formatting errors. I've had lots of computer issues lately, and the html gets messed up and I just can't fix it sometimes. 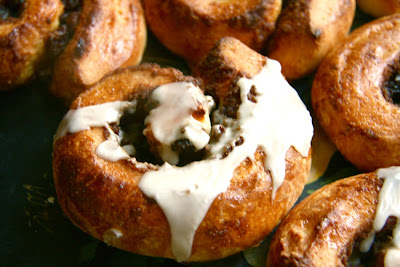 I love your tin, I'd say that was a perfectly beautiful idea. I loved the brioche and while I'll make it again there's no way I could eat it on any regular basis.
Gorgeous rolls.

Love that vintage mold! I made sticky buns with mine as well - and yes, if the middle class is that buttery, I worry about rich man's...

Your Little Brioches and Cinnamon Buns look great. GOODNESS don't eat them all. :)
I just ate four slices of the #11. :O)
Great baking along with you.
Susie

I love the swirly tin! I love your snails too, so inviting.
My tetes disappeared too, oh well. :)

Your cinnamon rolls look amazing! And I agree with everyone else; I love your vintage pan.

Nancy, the loaf of brioche and the cinnamon rolls both look wonderful. My sister loves brioche so I have acquired the special pans for this bread but I really like the pan that you used!

Your vintage mold looks like it was made for a tete! And your cinnamon rolls look incredible. Glad they were a big hit with your hubs. I'm with you - this is not a bread I'll make often (although strangely, I think I've made brioche more than any other single bread!) but it's nice to have the experience of baking such a classic. And I really do think it works awfully well in sweet rolls. Yours are just beautiful!

Your snails look amazing!!! So perfectly formed, and plump and beautiful! I made some cinnamon rolls, too, but they didn't turn out to be nearly as attractive as yours - though they were delicious - so I didn't even photograph them. I used agave instead of sugar for the filling, so they slid all over the place, plus my dough was geting a little soft - I should have put it back in the fridge. Ah well... So funny that you went in for Baked and came out with Pure Dessert - that's exactly what I did!!!

Wow - you are just the bread baking queen. I am so impressed with all those amazing flour/yeast creations.

I can only wish for that much talent!

Brioche cinnamon rolls are something I have been wanting to try -- how decadent and delicious! And I love your mold.

What lovely brioche creations! I am glad you are doing it, even at your pace. This recipe was really good I thought, and made wonderful cinnamon bread.

WOW!! these all look amazing!! Not sure what I would grab first...some brioch--from that lovely mold to boot--or the cinnamon rolls! Looking forward to reading all the other versions/blogs in your BBA group! :)