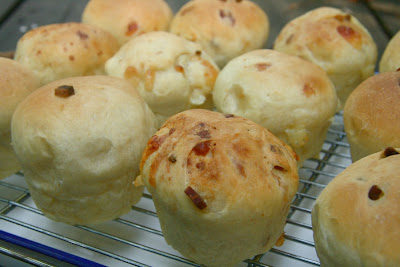 It's time for the next bread in Peter Reinhart's Bread Baker's Apprentice. As part of the BBA Challenge, I am baking my way through the book, from beginning to end, which in this case means alphabetically. (We've baked the "A" and "B" breads already. Sadly there are not breads for every letter of the alphabet, but the early letters are well-represented at least!) This week's bread is Casatiello, which according to the book's author Peter Reinhart is "a rich, dreamy Italian elaboration on brioche".

In truth, I cannot say I was super-excited to be making more brioche, seeing as I'd just baked the BBA brioche, and the most recent Tuesdays With Dorie choice was a brioche-crusted tart (posted on my other blog, here). But "in for a penny, in for a pound" as they say; the Challenge is to bake each recipe in order, so that's what I'll do.

A few things turned around my attitude on this recipe:

1. I was amazed and inspired by what Holly, of the blog PheMOMenon did with her casatiello - she made mini loaves in little white paper cups (known sometimes as nut cups) Bingo! I could make individual rolls for...

2. My book group was having a summer dinner. Baking casatiello as dinner rolls was sounding like a great plan. The main course was fried quail, and I was excited to see...

3. One of the variations suggested by Peter Reinhart is for bacon casatiello. I've had a love affair with Benton's bacon (that began with a wonderful creamed corn that I made for last year's book group summer dinner) and was excited to experiment with it inside of homemade bread..

I figured that bacon and cheese dinner rolls would be a great complement to the dinner menu: fried quail, tomato pie, and spinach salad (brownies and ice cream for dessert). 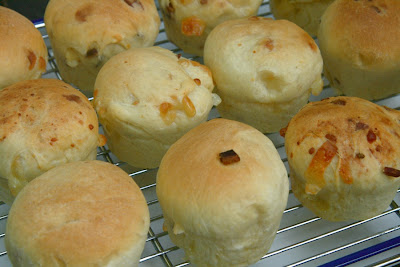 - The word Casatiello is singular, and is used for one loaf. I know that the plural is Casatielli, for more than one loaf. My guess is that a bunch of tiny breads would be Casatiellini, but if you know Italian let me know in the comments if I'm right or wrong!

- Unlike many of the breads in the BBA book, which require an overnight rest, this bread is made with a quick 1 hour pre-ferment. I mixed buttermilk into my "sponge". It got very bubbly very quickly, but at that point life intervened and it was much longer than an hour by the time I got back to it. The sponge had separated and I wasn't sure how it would do, but I just gave it a good stir before mixing with the other ingredients and it was fine.

- The food processor did a great job of mixing the dough (dry ingredients first then add sponge/wet. 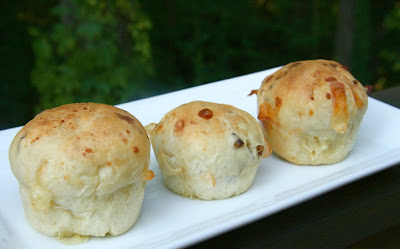 - Instead of 2 chicken eggs, I used one huge duck egg plus a bit of egg white from the fridge.

- The Benton bacon has a pretty smoky, intense bacon flavor. I didn't want to overpower the rolls, and finally settled on 4 oz of uncooked bacon, which I keep in the freezer already chopped into lardons. I cooked it slowly for fat to render, and it ended up slightly less than 2 oz when cooked.

- For fat/liquid, here's what I added:
2 oz butter
2 oz bacon grease
2 oz skim milk (I had fun listing that as an ingredient!)

- I formed the rolls into balls and baked them in muffin tins. I got a little lazy with my math, so ended up with 2 sizes: twelve at 2.5 oz each, and six at 1.75 oz. You can see the difference in the picture just above.

- All the rising times were much faster in my kitchen.

These rolls were perfect! They had a lovely soft moist crumb with little melted cheese pockets and a smoky bacon flavor. I think they would make a great breakfast or brunch bread, with scrambled eggs. I'll definitely make these again!

Update: I'm sending these to Yeastspotting, a weekly roundup of all things yeast-y. Check it out each Friday! 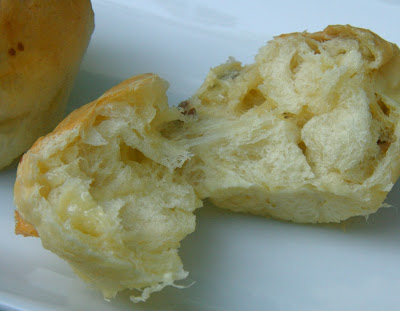 See the melted cheese over to the left edge? And the crumb on these rolls was outstanding.

Wonderful idea to turn them into dinner rolls! I just bought some more salami yestereday so I can make this again! I've been thinking about it ever since I made it the first time. It's still my favorite so far (although it might be tied for first place with the Cinnamon Raisin Walnut Bread I just made!) :-)

Oh, I love the inside shot of these, that looks so delicious. The outsides look great, too, and I agree, this is one very tasty bread. Nice post.

Oh, I agree, I think rolls are the way to go with this one! They look wonderful...and the rest of your book club dinner sounds fantastic, too. I'm going back in search of that creamed corn recipe now...

Those look wonderful, Nancy. I especially like the shot of the last one, pulled apart. This recipe is so fun to play around with. =)

Yes, that's is how you would write little Casatielli in Italian. I have to say that I didn't like the bread for many reasons, one being the size. I bet the bacon and the miniature size would work wonders on this bread. Great job!

I loved the cheese pockets! Your rolls look perfect. I'm glad they were a hit.

This recipe was our favorite to date (though this week's challah was a close second...) I love your minis!

Nancy - those look soooo tasty. Hot and with a little butter - HEAVEN!!!

Whoa...these truly look fantastic! I've seen a few of these this past week and I must say that the recipe has me drooling. Great job, Nancy!

Great idea to make these into small rolls. I had a bread the size of a basketball on my hands. And we ate the WHOLE THING!

Wow, that sounds like quite a menu, and the perfect rolls for it!

It's so fun to see how person has been making this same bread. So many variations.

I bet your book club loves you!

Your rolls look perfect! I want to try them again now... so hungry for bacony bread...

Those look perfect. I would not have thought of making them into dinner rolls. Well done!