The Quest for a Perfect Cinnamon Raisin Bread {bba} 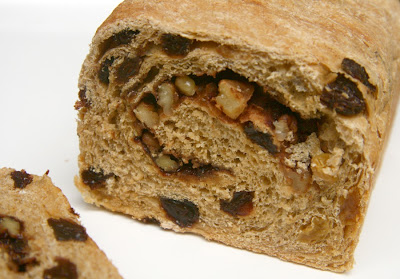 I've never been that kind of person who is always winning things like lotteries and drawings. But back in 1988 we won a trip to Aspen, Colorado in an American Express promotion. (Actually it turned out to be quite a lucky year for us; we also won a trip to Palm Beach, complete with a set of luggage!)

We chose to take the Aspen trip in the summer when we could hike in the Rockies. So in July 1989 our family had a lovely week in a condo on the mountain at Snowmass. My parents and brother decided to join us and rented a nearby unit. Five adults to watch 2 children (ages 1 and 3) made for a very relaxing trip indeed.
On a grocery run to stock the condo with breakfast food my husband picked up some bread and thus we discovered the Holy Grail of cinnamon raisin bread. Rudi's Bakery made the best we'd ever tasted. We bought loaf after loaf that week, and brought some home in our luggage, but all too soon we reached the end of our supply.

For Christmas that year I called Rudi's Bakery on the telephone. No, they didn't distribute their bread outside of Colorado, nor did they take orders - usually. As a special exception the fellow at the bakery actually agreed to sell me 5 loafs of the raisin bread and personally went to the post office to mail it to me! I still count that as the best Christmas gift I ever gave my husband!

Fast forward to about 5 years ago: Whole Foods opened a location just a few miles from us. My first time in the store I wandered the aisles and browsed all the departments to see what kinds of things the store carried. When I came to the bread shelf I could hardly believe my eyes: Our old friend Rudi's Cinnamon Raisin Bread was right there in front of me. I scooped up a few loaves and we were delighted to find that the bread tasted just as good as we remembered. Seems that in the intervening 15 years, Rudi's Bakery had gone national. So we've had a ready source for what we'd come to believe is the best cinnamon raisin bread on the planet.

Rudi's bread is the standard by which I judge every other cinnamon raisin loaf I've ever tasted. So far, none has come close. I'm not sure when I'd have ever dared to undertake homemade cinnamon raisin bread but BBA Challenge gave me the push; Cinnamon Raisin Bread happens to be the next bread in Peter Reinhart's The Bread Baker's Apprentice. (And, yes, there has been a lot of cinnamon goodness lately here on Corner Loaf)
Rather than make the bread exactly as written, I decided to make a run at Rudi's! This meant making a few changes to transform a white cinnamon bread to one that was about a third whole grain.

A week later I baked the Transitional Cinnamon Raisin bread, from Peter Reinhart's Whole Grain Breads, which is about half whole grain and half white flour. I've included both baking sessions in this post, starting with the BBA bread.
Cinnamon Raisin Bread - The Bread Baker's Apprentice 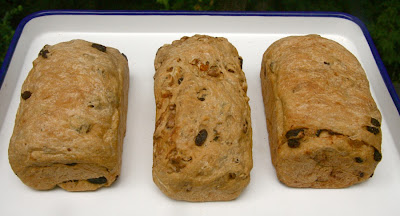 - You can find the recipe on the Google Books preview, here.

- This bread is made with the direct method, which means that it is mixed and proofed in one day, with only a short wait for the dough to "ferment" on the counter. 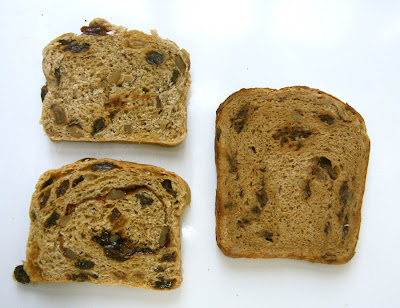 homemade on the left, Rudi's on the right

the verdict:
I gave away the cinnamon + raisin loaf. We toasted up slices of the other two loaves and Rudi's. The non-swirled bread was the closest to Rudi's, so we compared it in taste-test fashion. They were all seriously delicious pieces of toast. Rudi's is closer grained, and I thought it was chewier, more cinnamon-y, and a bit sweeter. But we thought the BBA bread tasted just as delicious as Rudi's! In fact, my husband said he preferred my bread, but I think he was just being sweet. When it comes to the swirled bread, though, even I agreed that it was better than Rudi's. It's hard to beat swirled cinnamon sugar!! 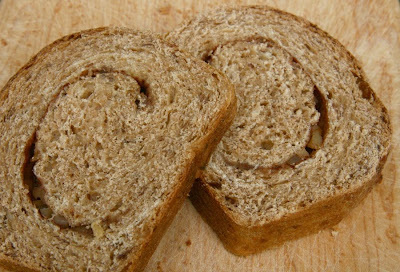 There are a lot of raisins in this bread, but the food processor chopped them into bits!

- You can find the recipe on the Google Books preview, here.

-This bread is made with the indirect method, spread over 2 days, with both a biga and a soaker (two different types of mixtures that sit, or ferment, for a day; one in the fridge and the other on the counter)

- The raisins are added to the soaker so they get nice and tender. The biggest problem with that for me is that I used my food processor to mix the dough, so the raisins got chopped up rather than remaining whole in the finished bread. If you use a stand mixer, or mix by hand, your raisins will stay whole.

- Also, the food processor stopped mixing slightly before the biga and soaker were fully incorporated, so there are light and dark steaks in the bread's crumb (as you can see in the picture, above).

- Again I added a bit of molasses.

- I split the dough into two loaves, and made both with a swirl of walnuts, brown sugar + cinnamon. I'm not sure why my swirl almost disappeared this time around, but it added some delicious flavor.

This was a wonderful, hearty, chewy, cinnamon raisin bread. As with all of the breads I've baked from Reinhart's Whole Grain Breads, the bread was not tough or dry at all - the pre-fermenting method brings out the flavor of the grain and keeps the bread nice and moist. It tasted a bit fuller and nuttier because of the whole grain. We thought it was perfect toasted and spread with butter, and, believe it or not we actually preferred this one to the other cinnamon raisin bread. It is a close grained bread and the whole grain flavor pairs beautifully with the spice and sweetness of the (chopped) raisins. The few extra steps are definitely worth the end result: cinnamon bread perfection!

[Edit to add: Sending this wonderful bread to Yeastspotting, a weekly roundup of all things yeasty]

So glad this was such a success! I will try the WG one next too. Looks great!

what a nice story! there's a 7-grain bread from a local bakery that I'm addicted to...when I lived in Delaware I used to buy two or three loaves every time I drove up here and then ration them until my next trip. I think it would be perfect to be able to sometimes make, yet still sometimes buy, the bread of my dreams!

How great that the BBA breads compare favorably with your gold standard. =) I hate when I fall in love with a food or ingredient and then have a hard time finding it later. That's one nice thing about living in Austin--there are so many people from other parts of the country that we have a great mix of things from all over.

Oh Nancy !It was like reading a mistery (?) book !!! I'm glad you liked the breads ! I have the whole grain book so I'll try it soon (This morning I had the last raisin cinnamon slice) ! I don't know if it's the same for the other blogger who love your posts but reading the last small lines it's very difficult because they are small and invisible grey !!

I wonder if the WF two hours away carries Rudi's Will have to check, but since you have zoned in on the 'recipe' may not need to.

Beautiful breads. thanks for the tips.

Not being a huge raisin fan in general, I'm actually intrigued by the idea of the chopped up raisins to add, as you say, the spice and sweetness throughout. Both breads are beautiful!