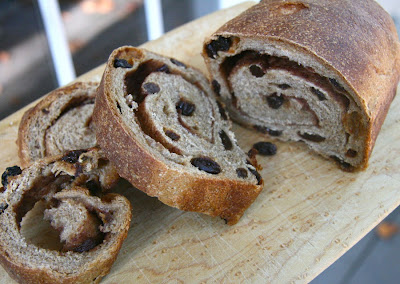 Free-form loaf made by my daughter

I'm fairly new to baking bread; my kitchen's first yeasted baked good was less than three years ago. Since then I have had lots of fun turning out bread, and have introduced both of my girls to the basics of working with yeast. My daughter ALE took off running, and has become a proficient bread-baker. She fearlessly tackles things which are far out of my league: maintaining a sourdough starter, working with spent brewing grains, and baking in an outdoor hearth oven at temperatures far exceeding the typical home oven.

Since the beginning of the summer, ALE has been baking bread with the Fancy & Delicious bread collective in Buffalo, NY, to sell at market and for a bread share program. (see an article about about Fancy & Delicious here and a lovely video here)

One of the collective's most popular breads is the Fancy & Delicious Cinnamon Raisin Bread. When ALE came home for a visit in August, she baked up a batch of the bread for us (that's her loaf in the picture, above) and left me with the recipe. At the moment, it's become our favorite "daily bread" - the stuff of my husband's morning toast.

I'm posting this bread today in honor of World Bread Day, and also as part of my friend Di's Handmade Loaf Event. Additionally, I'm sending the bread to Yeastspotting, a weekly roundup of all things yeasty.

- The recipe is for 3 moderately-sized freeform loaves, but I used two long loaf pans (1 pound size) and ended up with perfectly-sized loaves for toasting. I oiled and floured the pans, and lined the bottoms of the pans with parchment.

- There are a variety of slightly different versions of is bread recipe. The recipe, as I baked it, is below.

- You can use whatever combination of white and whole wheat flour you like, as long as the total is 6.5 cups. I measured by weight, at 4.5 oz/cup, then adjusted for dough consistency.

- For richer flavor, you can add butter to the cinnamon swirl as you prefer

- At Fancy & Delicious, they mix the dough in a commercial stand mixer. I used a food processor (the dough really filled my large food processor), but you could definitely mix and knead the dough by hand.

- Add the liquid gradually, just enough for good dough consistency, because the dough can get quite slack with too much liquid. 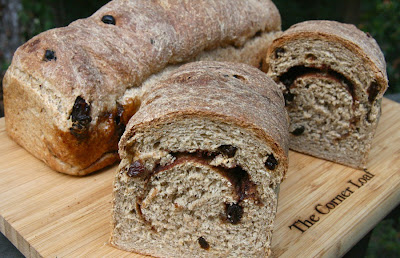 These are my loaves, made in a bread pan. For this batch I mistakenly was short on both raisins + cinnamon swirl.

The minute I tasted this bread I could see why the loaves consistently sell out when Fancy & Delicious sells bread at market. A toasted slice was a perfect cinnamon-raisin experience! It's nutty from the whole grains, and sweet from the raisins and the luxurious swirl of cinnamon sugar. We love this bread so much that I've made it again and again, and now it's my go-to for cinnamon-raisin.

the recipe below is how I made the bread. My friend Kayte baked the bread using the one-loaf recipe variation that the Fancy & Delicious collective uses when it teaches bread workshops. You can see her loaf and get that recipe here.

1. Mix the flour, yeast, cinnamon, and salt, to combine

2. Gradually add the milk, honey, oil, and water, adjusting quantity of liquid to the consistency of the dough.

3. Knead until the dough passes the windowpane test. In a food processor this will take about a minute.

4. Knead in the raisins. If you have been using a food processor, add the raisins by hand.

5. Turn the dough into an oiled bowl, cover, and let the dough rise at room temperature until doubled in volume.

6. Divide the dough and form into desired number of loaves, shaping as follows:

a. Prepare 8.5x4.5 bread pan: butter pan and cut parchment to fit pan (so cinnamon sugar will not cause bread to stick to pan), butter/flour parchment.
b. Shape dough into rough ball and grab a rolling pin.
c. Roll dough into a rectangle 1/2" thick.
d. Spread the 1/4 cup cinnamon sugar over middle of the bread, leaving an inch around all the edges.
e. Start rolling by turning a short edge inward.
f. Roll tightly until a cylinder is formed.
g. Press down edges, turn seams under, roll on work surface until sealed.

If using loaf pans, place into pans seam side down. Let loaves rise at room temperature until doubled.

7. Bake in 400 degree oven for 40-45 minutes, until loaves sound hollow when tapped on the bottom and the internal temperature is 195 degrees on an instant read thermometer.
Posted by Nancy/n.o.e at 3:54 PM

How have I known you all this time and not known you had this blog, too? I love your loaves. I made one of the versions of this bread not too long ago, and it was really good.

Looks really good! My family loves cinnamon raisin bread, and I like the combination of flours.

Thanks for the reminder about this bread. When I saw it on Kayte's blog, I meant to make it soon, since it looks so delicious. But I haven't gotten there yet. I'm putting it down for next weekend, since G asks me at least once a week when I'm going to make raisin bread for her. =) Thanks for baking along!

Is this the left brain of your blogging? Or the right - and how did I not know? What a great specialized area - just for bread! Wonderful recipe - TWD's cinnamon bread was my first "rolled" bread. I will have to make this - as my folks love the rolled cinnamon breads now that I make them! Beautiful photo!

Cinnamon and raisin bread is one of my favorite breads and this one looks wonderful! This would be so delicious toasted with a cup of tea in the morning.

That is gorgeous...can I have some for my breakfast too? That is looking a lot more delicious than my bowl of cold cereal today!
XO,
Mary

This was so good...I need to make it for us again. ALE has the best bread recipes, I love all of the ones she has recommended. Your loaves look great...as usual. It is hard for me to believe that you have been baking bread such a short time as you always have all the answers to my questions and you always have great looking breads. I am addicted to bread baking in the fall, winter, and spring. Summer not so much. I get up every morning and think about which bread I should make next. People are very happy to receive bread gifts!!

Both of those breads look so gorgeous! I would be happy to eat a slice of either of them