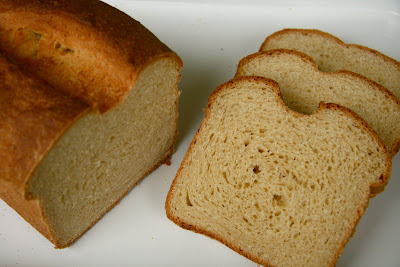 My mother tells a story about her grandmother, one of three little girls. At one point all of them contracted smallpox and were very sick. They were all lying in the same bed when doctor came; he took one look at my great-grandmother, who was the sickest of the three, and said, "she is not going to make it. Roll her to the wall and we'll treat the other two." So they did, and as it turned out, my great-grandmother survived but her two sisters did not.

That's kind of how things went with this bread. Read on and you'll see.

There are dozens of bread recipes that I've bookmarked - physically and electronically - but I chose this recipe for Ricotta Bliss Bread, which I saw on Rose Levy Beranbaum's blog (it's also in her Bread Bible), because I had a container of ricotta in my fridge that was calling to be used.

- Beranbaum calls this formula "bliss" bread, presumably because it is so perfect, but of course I had to tinker with the recipe, adding some whole wheat and subbing honey for the sugar.

- This is a direct rise dough, so it can be mixed and baked on the same day.

- I baked it as loaf bread (although Beranbaum waxes rhapsodically about how great it tastes as a free form loaf.)

- The recipe calls for the whole milk ricotta; I used part skim.

- I replaced the sugar with 2 T honey, added with the wet ingredients.

- Just under half of the flour was white whole wheat.

- This was the first time I'd followed one of Beranbaum's recipes. The primary instructions for this bread called for the food processor. One of the ingredients is "cold water." Now, the water from our tap can hardly be called "cold" and our refrigerator's water dispenser was broken. So I threw a couple of ice cubes into some water and weighed it. Oops, short a few ounces, so tossed in more ice. Then on with the recipe.

- The dough was really really cold. I set the rising bucket in my warmest spot to rise. Usually my dough rises faster than the time estimates in the recipes that I follow.

- At the end of an hour I checked and saw that the dough had not risen. Not a bit. In fact it was still cold. During that hour, I'd finally done some reading in Beranbaum's book. There was a comment in the book that ice cold water would kill the yeast. Yipes. I became convinced that I'd slain my yeast with the ice water I used :(

- So I tossed that dough aside as a failure and mixed up another - smaller - batch of dough with the the remainder of the 15 oz ricotta container, scaling the other ingredients appropriately:

- A while later I looked over at the first batch of dough and found out it had risen after all. So I baked it in the 9x5 pan and put the other pan in the fridge to bake later.

- As it turned out, the first loaf, the "failed" one, baked up beautifully. And the second loaf? Lackluster! It didn't rise well, nor did it taste all that great.

- I've made this bread several times since this first loaf, and each time the dough takes a fairly long time to begin rising, but never as long as that first time when I used the ice water! 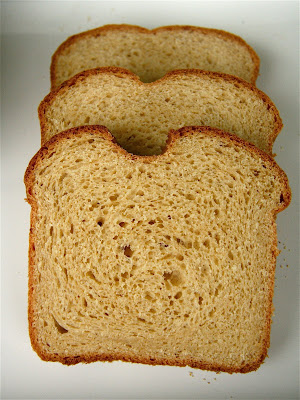 We couldn't believe how pretty this loaf was! My husband loved the taste of this bread, which he ate toasted, for breakfast. "This is so good I don't want to swallow it. It really is the best ever."

My daughter quipped, "the bread that the baker rejected has become the corner loaf" (a riff on Psalm 118) . Although she didn't intend this, her words, and indeed the afternoon's experience, spoke to me of paradox, improbability, redemption, and even resurrection. A fitting lesson, and... a great title for a blog! And the loaf? I'm commemorating it up on the blog banner! 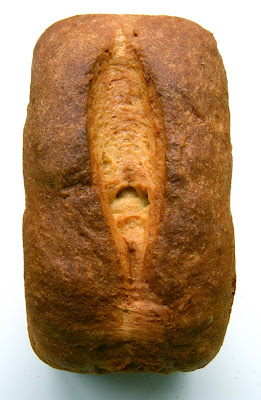 I'm sending this loaf over to Susan at Yeastspotting, a weekly roundup of fabulous breads.
Posted by Nancy/n.o.e at 9:09 AM

didn't realize you had started a new blog - what a gorgeous loaf!

That loaf looks amazing. I love the new blog and I'm looking forward to reading about all of your bread baking adventures!

Congrats on the new blog. I've added to my reader.

Your loaf looks and sounds delicious.

What a beautiful loaf of bread! It sounds really good too with the ricotta in there.

Great first post. With the ricotta, I won't be baking these, but do hope to try another recipe or two you post up here.

Congrats on your new blog! The bread is so crusty and the texture is perfect lovely!

Your bread looks great! I look forward to reading more of your bread/yeast adventures on this new blog. =)

Love the bread, inside and out...and love the new blog and name...perfect, all of it!

congrats on your new blog... i love the name and everything! frankly i'm just glad i get to read more of your posts. i love the way you dissect everything that goes into the making. :)

I did sign up for the BBA challenge. I really don't have a lot of extra time to add another group but I just couldn't help myself. I use that book and one of Reinhart's other books all of the time. Peter Reinhart is a bread genius! I love RLB's Bread Bible but I've had so much more success with the BBA. The breads that I've made from his recipes are just so incredibly good but I'm scared to make the loaves that I think are "really hard" like pain a la ancienne so I think that this group will force me to face my fears! Even if you don't join the BBA challenge group I highly, highly recommend giving the book a looksee if you don't own it already. I think that it's a book you'd really enjoy.

I feel like quoting The Borg . . . once you start baking bread, "resistance is futile. You WILL be assimilated!"

This post is convincing me that I need to get over my fear of bread making. The loaf is absolutely beautiful.

Gorgeous loaf and great story. My house tends to be on the cool side a lot of the year, so most of my bread dough takes a long time to rise. Seems to taste good, so who cares? This is a must try recipe for sure with both ricotta and whole wheat. YUM!

Ciao Nancy ! I love your stories, and your bread is delicious !! I'll have to try it I'm stuck on a recipe for sourdough by Rose ... I'll have to change !

Nancy,
ice cold water is normally used in bakery/restaurant to retard the dough and let it rise overnight in the refrigerator, so it can be shaped first thing in the morning. It also helps to develop more flavor so the yeast will slowly do its job. Another reason for using ice cold water is when mixing a big dough, the friction of the mixer will warm up the dough a lot, so by the end of the mixing the dough will still be rather cool when starting with ice cold water. I haven't read that ice water can kill the yeast, I doubt that it does, you can freeze yeast dough after the first rise, I do it all the time with left over pizza dough. My guess is that the dough was really cold and the yeast didn't get activated, it needed more time. Next time don't throw it away, just wait a little bit longer if you can.

I have some home made ricotta, maybe I will make this bread too.

Wow, definitely some great lessons to come out of this bread baking experience (but wow, how tragic about your great-grandmother's sisters. Stories like that make me grateful to be raising children in the era of modern medicine. It boggles the mind to think of all of the parents in past generations who suffered the ultimate tragedy of losing children to diseases that we can now easily prevent or treat). Anyway, the bread sounds incredible. "So good I don't want to swallow it" - wow, that is a great (and memorable!) compliment!

Love your honey wheat bread. You should submit it to the bread contest on my site. The winner gets a $179 Super Bread bread knife from New West Knifeworks. You can get more info here:

Let me know if you're interested. All I need is a photo of your bread (for voting) and the link to your recipe.