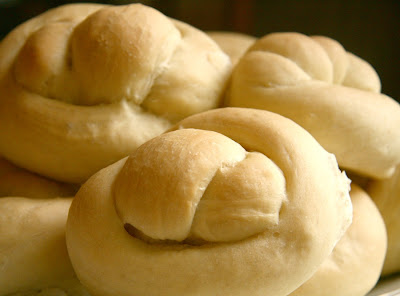 The oh-so-fabulous Bread Baking Babes baked Italian Knot Rolls as their May recipe. This month's host babe, Ilva from Lucullian Delights has the recipe on her May 20 post, along with some helpful pictures of how to form the knots into rolls (or is it: form the rolls into knots?) The Italian name for these rolls is pane di pasta tenera condita, and the recipe is from a book by Anna Gennari. I decided to bake the rolls as a Buddy of the Babes this month.

You can't get much more white-flour-soft than this recipe; it calls for white bread flour as well as Italian "00" flour, which is similar to white cake flour in North America. The most unusual/controversial ingredient in the recipe is lard. Ilva explained that the lard gives the rolls a special tenderness and flavor that it cannot get from any other fat. She also gives the reassuring information that the lard constitutes a mere 2.7% of the recipe. I've never cooked with lard; in fact I typically make a point of avoiding recipes with that ingredient. But I figured I might as well try it in the interest of accuracy.

- To make the recipe as written, I needed a couple of new ingredients in addition to the lard: fresh yeast and "00" flour. The recipe listed acceptable substitutions for each of them, however, so I knew I was covered if I couldn't find the ingredients. My first shopping stop was Star Provisions, a wonderful specialty market not too far from my house. I was in luck! I found both a block of fresh yeast and a bag of imported Italian "00" flour. Sadly, there was no lard to be found on the premises, so it wasn't one stop shopping. 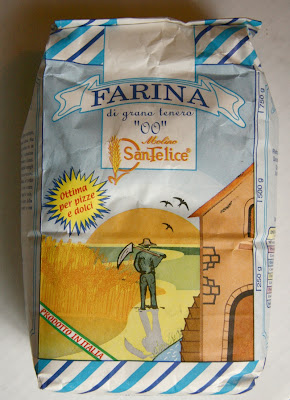 - My next stop was the local grocery store. The only lard that I could locate was a 2.5 pound tub. The package size seemed a little excessive for the few grams that I'd need, but it cost less than $4, so I put it in my shopping cart and called it a day.

- With my ingredients in place, I felt ready to tackle the knotty recipe!

- My plan was to make 1/2 recipe; a dozen or so rolls would come in handy without being too many.

- I was so curious and excited to use the fresh yeast in this recipe. It crumbled and dissolved easily with the bit of room temperature water.

- The directions say to leave the biga partly uncovered or cover with a towel. I chose the towel option and the contact with the air overnight made the biga form a dry crust on top. I hoped it would soften and incorporate when mixed with rest of dough ingreds 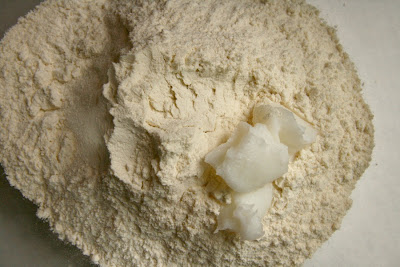 - The lard worked into flour beautifully.

- The yeast dissolved beautifully and everything was going nicely until I poured in all the liquid and realized that I'd neglected to halve the water. Luckily I hadn't yet added the biga. So I quickly mixed up another half quantity of all the ingredients - except the water - and mixed it in with the dough.

- But I only had a half recipe of biga! I weighed out half of the dough mixture and added the biga to it. At this point I was in "thrash mode" so I forgot I was supposed to add 250g of the biga. I just stirred it all in without measuring it.

- I added flour and water to other half of the dough and put it in the fridge to retard.

- It turned out that the "skin" of the biga did not soften or mix in with the dough, but just broke up into smaller hard bits. You can see the lumps in the picture of the finished rolls, 3 pictures below.

- The fresh yeast was very fast; my dough doubled in less than an hour. 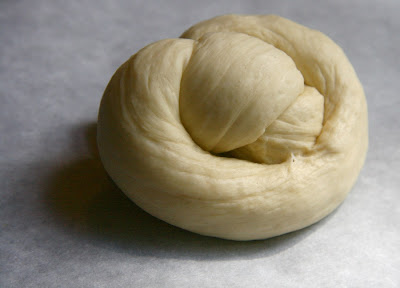 - I measured out 12 rolls at 100 g each. I'd never formed knots, so the diagram was very helpful. I found it easier to hold them in my hands rather than on the counter. As I went along I got better at pushing the ends up from underneath to make the knots pop up. 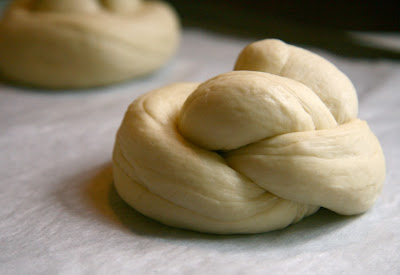 - The yeast continued to rise fast: the first roll was doubled by the time I shaped the 12th.

- The rolls were baked in short order: they reached an internal temperature of 200 degrees after baking at 375 for 20 minutes. 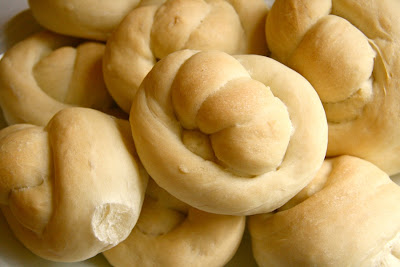 The rolls made a bit hit with my husband, daughter J.D.E. and her friend G. My husband loved the complex subtlety of the flavors: "This might be the best stuff you've ever made." All in all, I'm glad that Ilva chose this tasty recipe and I'm very glad that I baked along with the Babes this month.

A footnote about the other half of the dough, which I made as a non-biga version:
I was much better at the shaping technique. The dough was smoother. I had just guessed at the flour and water amount, but they rose and baked nicely. And the taste? A bit "flatter" and "flourier" and maybe a little "tougher" too, but not half bad ! We enjoyed these for sandwiches and as buns for our hot dogs on Memorial Day. 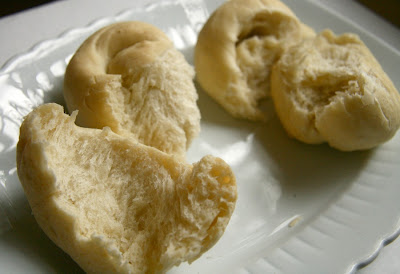 Congrats on making the knots! Even though they had you hopping, looks like they turned out well in the end. When instructions tell me to loosely cover, I still use plastic - I just do it with extra folds, etc, for expansion.

Sometimes I think I'm a broken record but these really were surprisingly good for their simplicity ... well knotting wasn't necessarily simple ;)
I do believe that the fat really changed these. 2.5 pounds lard, wish I could try your lard and you my duck fat ;)
So glad you enjoyed these and so happy to have you bake with us.

Ciao Nancy in spite of everything your rolls are really great !!!

Nancy, it is too funny, I just made these today too. I will post the results tomorrow, too tired now. I didn't use lard or the OO flour since I didn't have time to find either, but the bread tasted really good nonetheless.

Glad to be baking with you!

These were lots of fun to make and oh so easy!

Great lookimg knots, Tell you husband he's got great taste!! And you can freeze the lard and use it for frying for example, it is far healthier to fry in lard than with a lot of vegetable oils I have just learnt! And thanks for joining in!

It's fun to see these after reading your tweets (and not quite knowing what you were doing!) They look delicious and very Italian! Did you see the article in Gourmet about the homemade hamburger (bun, pickles, ketchup, etc.?) If you switch it to hotdogs you're off to a great start!

These knot rolls are absolutely gorgeous. I can't believe this is the first time you made them. Your shaping looks professional. The crazy ingredients alone kind of scare me off (I am quite sure that lard is easy to come by in Birmingham, AL; not as sure about 00 flour or fresh yeast) but these rolls look like they are well worth any effort spent hunting down the ingredients. You've more than earned that Buddy Badge!

They look beautiful. They remind me of the garlic knots that I get back home in NY from the pizzerias. You should put a nice slathering of garlicky butter on these...trust me.

Lovely job! More ingredients I'll have to try if I can get my hands on them. =)

I'm going back in on these...I know they have to be good just looking at yours and hearing everyone's comments and what a hit they were at your place. This time, I am going in with the proper ingredients and my reading glasses...somehow 2/3 cups of water and 2.3 cups of water just weren't meant to be interchangeable. LOL. Your knots are beautiful!

Your knots look great. I loved reading your knot adventure on twitter. I'm gld they turned out for you too.

Oh my gosh I foresee lard baked potatoes, flakey pie crusts.... and more beautiful rolls like these! You've landed in the land o'lard Buddy! Great job on the knots!

There is a place right by Sara's parents house that makes this with some sort of garlic/herb pesto thing that is ridiculously delicious. I never even considered trying to enjoy the pleasure of the complexity of (what I assume is) a similar dough product.

FYI: If you can cook anything out door, you should try your hand at rendering your own lard. Truth is you can get pig skin/fat cheap or free from a lot of places that cut hogs (if you ask for it in advance) like club markets or even some butchers who normally, literally, throw it away. It stays well in the freezer for a long, LONG time (no water) and is pretty easy to make.

Not to mention, you can make biscuits whenever you want! :)