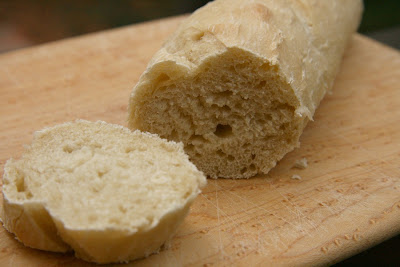 Peter Reinhart's book The Bread Baker's Apprentice is organized alphabetically, although it seems as though suddenly we are getting to a section of the book with serious breads: lean doughs where the flavor comes from how the flour water yeast and salt are handled, how long the dough ferments and rests, how the loaves are shaped and baked. There are few enriching ingredients such as milk, eggs, fruit, nuts or sweeteners to cover any baker deficiencies. No, these breads are veritable proving grounds, or so it seemed to me when I surveyed the upcoming breads: French, then Italian, and a bit later Pain a l'Ancienne, Pain de Campagne, and Pane Siciliano. Whew, these are the real deal!

Just the thought that I was going to bake French Bread was enough to produce trepidation, if not outright fear. It seemed so, well, French, and so perfect. We're talking baguettes here! Just as I was getting ready to tackle this bread I was browsing in a fancy kitchen store and saw some baguette forms. I bought one on impulse, hoping that would help me prevail in the challenge of baguette-baking. 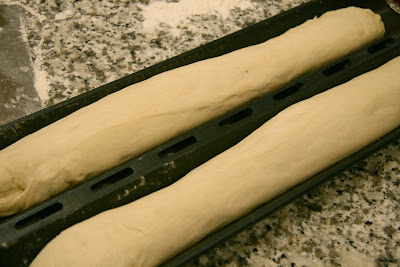 - My new baguette mold is made to hold two, loaves, and Reinhart's recipe makes 3 loaves, so I scaled the recipe to 60%.

- The French bread formula is a two step process, with at least a day between making the pre-ferment dough and making the final dough. In this case the pre-ferment dough is a pate fermentee, which has the exact same ingredients and proportions as are added the second day to make the final dough. Making the first half of the dough in advance allows for the flavors to fully develop from enzymes breaking down the starches in the flour over time.

- In the pate fermentee I used instant yeast, bread flour and all-purpose flour, and I mixed it in the food processor. It was pliable and perfect in a matter of minutes. The dough rose a bit on the counter, then I deflated it and popped it in the fridge. What followed next was a series of fridge and freezer sessions for the pate fermentee. I was trying to get this bread baked over Thanksgiving, but there just wasn't time.

- Finally the day dawned for baking French bread! For the final dough, all of the pate fermentee is used, and additional flour, water, salt and yeast (in the same amounts and proportions as had been used in the pre-ferment dough) are mixed in. I had ordered a bunch of specialty flour when King Arthur Flour had a free-shipping special, and for the final dough I used French Style Flour rather than all-purpose. (King Arthur's description: "This high-ash, medium-protein flour makes extra-flavorful baguettes and boules.") Additionally, I used fresh yeast, stirring it into the water before adding it to the dough. I mixed my dough in the food processor.

- Once the dough has risen, it is important to handle it lightly when shaping the loaf into loaves, so that the final bread will have lovely holes inside. I formed the loaves and let them rise on the baguette forms, then baked them right on the forms.

- I had a few missteps in shaping the dough (I'll spare you those details!) and my baguettes were a pair of ugly ducklings when they came out of the oven. They had cracked sides, and were a bit pale, not at all like the perfect crusty baguettes from a bakery. But they smelled wonderful! 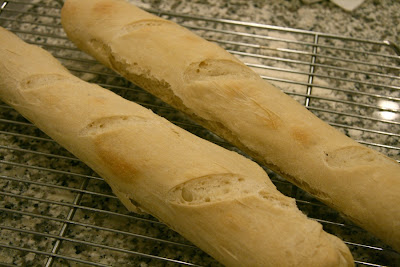 My baguettes weren't very pretty, and didn't get very crusty in the oven, but oh! the taste of this bread was out of this world! Luckily, I found - yet again - that bread is forgiving.
Posted by Nancy/n.o.e at 9:42 PM

Ciao Nancy ! Looking at your bread (much nicer than mine btw !) I wish I still had some !!!

I'm glad that you liked this bread. The French bread is high on my list of BBA favorites so far. I'd forgotten, but I think that the loaf that I ate right out of the oven had a giant crack down the side, too. I can't wait to try this bread again.

Great breads! The wetter the dough the funnier looking the loaf.. but they generally taste better.
Congrats on the bread forms. I have the Chicago Metallic baguette and French bread forms. Very handy.

Isn't it amazing how homemade bread is so much better than store-bought, no matter what it ends up looking like? And it's so cool to look at something like this and think, "wow, I made real French bread!!" =) One of the things PR talked about at the class was not being afraid to let crust get nice and dark. I'm going to try to do better with that.

Genial post and this mail helped me alot in my college assignement. Gratefulness you for your information.

I completely agree - mine didn't look too nice, the texture wasn't the best, but the flavor was wonderful. I need a lot more practice!

Your baguettes look great (you'll see ugly duckling baguettes when you visit me for the round up!) The flavor of this bread was fantastic. I wish I'd taken advantage of that shipping sale at King Arthur!