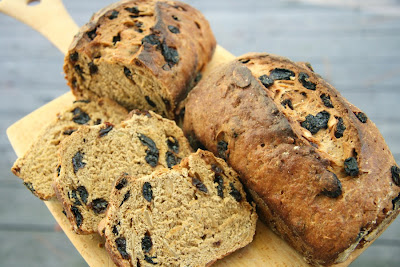 You've heard it here before: in this house we're all about The Toast.  I can't even remember the last time I made (or ate) a sandwich; our bread, baked in a loaf pan, is invariably consumed after a trip through the toaster.

My favorite bread-baker, Dan Lepard, recently published a recipe for Sherry Raisin Bread, Here's how Lepard explains the role of the sherry: "using it instead of milk or water, sherry adds a gentle flavour that lends richness without being immediately detectable."  Doesn't that sound good?

Lepard said how good it was toasted, and I knew I had to make the bread.  My baking buddy Kayte, who blogs at Grandma's Kitchen Table, was up for a virtual bread bake, so we baked "together" via electronic communication.  She made her dough into rolls for the week's sandwiches, but you know that I stuck with the loaf, because: Toast.

-  you can find the recipe here.

-  I followed the recipe's ingredients, except I skimped a bit on the measure of raisins and almonds.  There were still plenty of each in the dough.

-  The sherry is not the only distinctive ingredient.  The recipe also calls for adding marmalade to the dough.  I used Branches Three Citrus Marmalade from Katz Farm.  Milk, a substantial proportion of rye flour, and bread flour complete the flavor profile

-  Dan Lepard baked this bread as a hearth loaf, but I split my dough into three smallish loaf pans, to better optimize the bread for Toast.

- My dough took longer to rise than the recipe's times.  This is unusual for me with Dan Lepard's recipes, which are usually spot-on in my kitchen.  I gave the extra rising time until it rose close to the appropriate amounts.  Even so, the crumb of the finished bread was pretty dense.

Even though the bread didn't rise to lofty heights, oh, my, it was exceptional in flavor.  We loved it toasted with butter, and it was pretty darned good just sliced and eaten plain.

To see how this recipe tuned out as buns, check Kayte's post. (hint: they look amazing!)

Thanks for finding this recipe, it was so good. It was also fun to make. I skimped on the raisins and nuts as well...and look how many are there anyway, plenty for this raisin/nut loving family. His recipes are always such good ones. I will make this again sometime. Your loaves are beautiful, I will need to try that so we can make toast with it...and I'm getting sherry to do it with! I want to taste that version.

This loaf sounds and looks really yummy. I'm not sure about the marmalade, though. I'll have to take another look at the recipe.